The Northern Lagoon of Venice has always been a crossroads for a significant amount of migratory species .

Some of them spend short periods here, for a break during their long journey between one continent and another. Others stay here much longer, becoming part of the local fauna.

This variety of bird species attracts many bird watchers from all over the world. However, the Venice Lagoon is not easily accessible, like all those areas where nature still has a predominant role in human activity.

It is for this reason that Andrea Rossi has thought that his knowledge of the lagoon ecosystem could be of great help to all birdwatching enthusiasts, who wish to admire closely the species that live in these places.

Who is Andrea Rossi

Andrea Rossi was born in Venice in 1967. A fisherman by profession for 4 generations, he lives in the beautiful and colorful [island of Burano] (https://www.isoladiburano.it/en/?rel=nofollow&target=_blank).

Attentive observer of the marine and terrestrial fauna, for some years he has discovered that in the land of his property in which he placed the fishing equipment, located on the island of Torcello , he met more and more often birds of various species such as pheasants , wood pigeons , falcons and also ducks .

Seeing them stopping undisturbed, lying on the ground and among the trees, he decided to create an impressive birdwatching observatory .

A real paradise for birdwatchers and photography , who can literally immerse themselves in nature and enjoy truly unique moments, thanks to the hut that offers a magnificent 360-degree view. 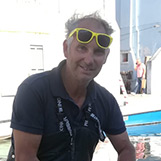 My name is Andrea. I'm an expert on the lagoon of Venice...